Ups & Downs of the Modi Government 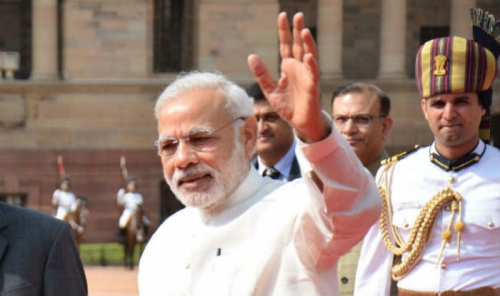 India attained independence in 1947 after years of ordeal under the colonial rule. The dawn of new era marked with the tenets of equality to all, freedom and upholding various individual rights earlier curbed by the colonial government. But, the new era of independence also witnessed the rise of a contemporary India, which started with a gruesome bloodshed of partition. Partition was not the result of any religious differences, but was the direct result of the fulfilment of political ambitions. India is known to be the largest democracy in the world. It is guided by the longest written Constitution, and being a largest democratic institution, the process of elections has been given utmost significance. As the process is guided by the constitutional process, and must be ensured free and fair, as it determines the formation of the government. And, in the healthy democracy, such rights are duly protected by the enactments and constitutional provisions and any violation directly results legal remedy.

The last Lok Sabha election was scheduled in 2014. But, this election was a major setback to the previous government in power. The rising issues of corruption and deteriorating conditions of economy leading to the debilitating situations of the farmers crippled the chances of the previous government to set a foothold again. The Anti-Congress sentiments resulted in the rise of Narendra Modi in the national level. Shri. Narendra Modi, had a strong foothold in the State of Gujarat. With his increasing achievements and credentials, he managed to create a nationwide image deviating his negative image of the post-Godhra riots. His credentials subsumed his criticism. The nation looked forward to a charismatic leadership due to the puppet show of Congress President Sonia Gandhi. Narendra Modi projected himself as an ideal leader that the country needed, and with his bolstering speeches he won the hearts of the masses. His different style of appeal to the masses, by projecting himself as a “Chai Wala”, and with his rhetorical statements to abolish the rule of one family, he managed to mark a new trend. He emphasised the importance of youth empowerment, and diverted from the orthodox Sangh ideology, by focussing his campaign on critical issues of national importance. He idealised his campaign on the issues of development, economic upliftment, poverty eradication, inclusive development (Sabka Saath Sabka Vikas). His sloganeering had a deep impact on the masses, and the electorates overwhelmingly voted for the Government.

The results of the Lok Sabha elections were as expected. The BJP marked a sweeping victory, and formed the single largest majority in the Lok Sabha. The first maiden speech of the Hon’ Prime Minister in the Lok Sabha focussed upon thanking the electorates whole-heartedly, and appealing to the opposition to channelize their energy collectively towards building a vibrant nation. The beginning of the new regime was highly expected to bring new reforms, and enhance Indian economy to reach its milestone. The Modi, apart from his charismatic personality, also attains deep diplomacy skills. He invited leaders of various countries in his swearing-in ceremony including the Prime Minister of Pakistan, which raised many eyebrows. The Hon’ Prime Minister successfully managed to maintain diplomatic ties with several world leaders. His Act East Policy, with objective of establishing closer strategic relations with the neighbouring countries. His first international visit was in Bhutan rather than engaging his diplomatic relations with western countries. Post reform era accelerated diplomatic channels with the United States of America, but after Modi became the PM, his new innovative way of engaging with world leaders such as Chai pe Charcha, managed to create strong rapport with the US President Barack Obama. The international community and world leaders have highest regard for Mr. Modi, and the world is considering India as an ideal destination for investment. Visionary projects like Make in India, Housing for All, Digital India, Start-up scheme has attracted many international businesses. The recent Make in India Week, brought nearly 1.5 lakh crore worth of investment. Even the Swedish leadership too acclaimed the international focus shifting from China to India. Apart from business and infrastructural projects, Shri. Narendra Modi, created a worldwide image of India as a leading nation. The acclamation of his maiden speech in the United Nations, and gathering worldwide attention and support on issues of terrorism and climate change has also marked a significant achievement.

Though the Hon’ Prime Minister has gained a significant international appreciation, but equally the criticism has groomed in the domestic level. The opponents have consistently targeted the BJP, and its star campaigner of having a deep influence of Sangh ideology. There were apprehensions that the roots of secularism and religious harmony would be in danger if BJP comes into power. But, the electorates showed faith towards the new leadership, by trusting upon the promises of development. But, the incidents of religious distress have accelerated in the recent times. The popular voices have raised fears of tarnishing the very tenets of the pluralistic society. Freedom of speech and expression propounded by the Constitution of India is curbed through arbitrary and demonic laws of sedition, 295A of the IPC etc. The political intervention in the educational institutions and lack of vigilance upon the lower units is increasingly deteriorating the popularity of the government. The government has been labelled as pro-corporate due to increasing rate of suicide amongst the farmers. The deadlock in the Parliament, and growing religious insecurity is leading to the downfall of the government. The BJP failed to mark its victory in Bihar elections due to stronger alliance of the opposition. The caste based politics caused a setback to the upper caste Hindu centric ideology. The BJP has failed to keep a strong control over its party units. Hate speeches delivered by Aditya Yoginath and Sakshi Maharaj or violent acts of the Hindu extremist groups only destroys the very face of democracy. The recent discrimination over caste that led to the suicide of Rohith Vemula, and the recent JNU row has caused discontent amongst the masses. Though, the nation is surrounded with the debate of Nationalism v Anti-Nationalism, but the real crux lies in reducing the influence of Sangh ideology in the educational institutions. In a healthy democracy, discussions and criticism are equally regarded and must be appreciated. Therefore, actions to crush criticism against the government are highly condemnable. The PM must step into these current rows, and must uphold the earlier promises of inclusive growth and good governance.

India has always been applauded as a strong democracy. Despite of being a pluralistic society, the democratic institution has strongly upheld the society together against sectarian lines. It is undeniable that the efforts of the Hon’ Prime Minister towards creating an international image of a new India, and holding deeper and stronger strategic collaboration with the international community. The Indian Foreign Policy has taken a new approach, and even in sectors of defence the government is engaging into closer partnerships. The rescue operation in Yemen called Project Rahat was internationally applauded, as several Pakistani national were also rescued from the war torn country by the Indian forces, but domestic issues must also be given equal attention to maintain religious harmony, and tents of the Constitution must be upheld without any totalitarian ideology.

Previous article30% of Indian Lawyers May Be Fake: BCI
Next articleAll India Bar Exam Challenge to be Heard by Constitution Bench