The Story and some Statistics behind the Jat Agitation 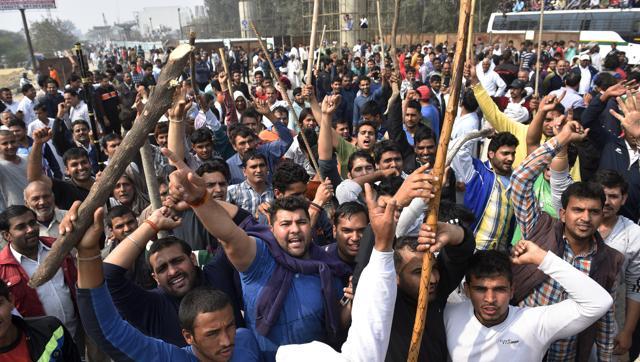 Jats are a dominant caste in the Indian state of Haryana. They are also found in large numbers in various other states of northern India. As of 2016, the total Jat population in India is around 82.5 million. In Haryana, they form 29% of the state’s population. The Central Government of India as well as the various State Governments categorize certain socially backward castes as Other Backward Classes (OBC). The castes listed in this category have been entitled to ‘affirmative action’ benefits since 1991. Together, these castes have reserved quotas in government jobs, admissions to educational institutes, scholarships and other areas. The communities that are included in the list as OBS differ from state to state. The OBCs have 27% reservation.

According to the National Commission for Backward Classes (NCBC) guidelines, to be classified as OBC, a caste has to satisfy the following criteria:

The Jats however, do not meet any of these criteria. They are an economically and politically well-off community. Nevertheless, like many other castes, they have wanted to get themselves included in the OBC category in order to get the reservation benefits.

Before the 2016, they had already been given OBC status in 7 states; Chhattisgarh, Delhi, Himachal Pradesh, Madhya Pradesh, Rajasthan, Uttar Pradesh and Uttarakhand. However, Jats were not included in the Central Government’s list of OBC castes. Also, in Punjab and Haryana, where they form a dominant caste, the Jats did not enjoy any reservation benefits. They now seek to be included in the OBC list in Haryana, Punjab and Jammu.

In January 2016, Sarva Jat Khap Panchayat (council) of Jats made an elaborate plan for protests demanding reservation quota. This started a series of ongoing protests. The protests started in mid-February and turned violent by 20 February. In Haryana, the protesters blocked highways and railway lines, burnt down several vehicles, damaged public and private property, and set the house of state’s finance minister on fire. They also blocked water supply to the neighbouring Delhi, resulting in a temporary water crisis in that state. The Government deployed Indian Army and paramilitary forces to control the violence. Nineteen people have died so far and more than 100 have been injured during the events.

The Government has attempted to pacify the Jats by setting up a committee to look into their demand.