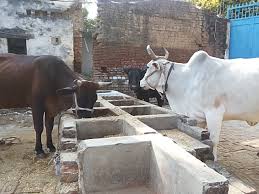 The meat industry is third largest contributor to GHG (Green House Gases) emissions. The livestock industry represents 14.5 percent of human-induced GHG emissions. [i] One of the main ways in which the livestock sector contributes to global warming is through deforestation caused by expansion of pasture land and arable land used to grow feed crops.[ii] It has contributed to massive deforestation of Amazon rainforest in Brazil. Beef is one of the biggest exports of Brazil and deforestation has occurred to make way for pastures.[iii] Feeding and growing these animals require extreme amounts of water. The transport of these animals is another factor which contributes to CO2 emissions.

Despite the abundance of evidence that shows how consumption of meat is detrimental to the government, almost every government across the globe have stayed silent on this issue. The motive behind doing so is evident. Animal husbandry provides employment to many. People have been dependent on animals for centuries for food, banning it now will cause massive resentment amongst people.  These deeply rooted sentiments attached to livestock, makes it near impossible to ban it.

The next best thing the government can do is to undertake sensitisation programs on detrimental effects of livestock. The government can also mandate laws and implement policies that ensure the use of technology to reduce carbon emissions caused by the livestock industry. On a global level, a few of measures have been taken for the same.

In California, a state legislator introduced California Climate-Friendly Food Program bill, with the goal of promoting plant-based foods in schools and reducing greenhouse gas emissions linked to livestock.[iv] In face of opposition, the bill was renamed as the California School Plant-Based Food and Beverage Program. Similarly, in Maryland(USA), the state’s Green Purchasing Committee launched the Carbon-Intensive Foods Subcommittee to study which foods have the largest carbon footprints and to steer the state away from buying those foods, like its predecessor , the commitee was met with opposition and was soon disbanded.[v]

There is limited data on carbon emissions of meat industry specific to India. An article by IIT Delhi and the Deenbandhu Chhotu Ram University of Science and Technology, Murthal reported that Indian livestock emitted 15.3 million tonnes of methane in 2012.[vii] In India, the encouragement to go vegetarian is on religious grounds rather than environmental. While awareness programmes like in the USA seems like a possibility to reduce meat consumption in India, the use of technology to reduce carbon emissions from meat sector is not possible since animal husbandry is practiced in rural areas where access to technology is limited.

Previous articleEvolution & Technological Invasion of FIRs
Next articleDating apps: should we regulate the gold mine for scammers?