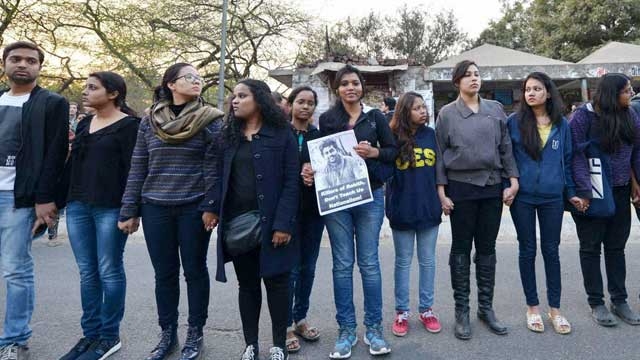 The Jawaharlal Nehru University (JNU) is a public university set up in 1969 by an Act of Parliament. The present controversy surrounding this university began on 9th February when an event was organized by the ultra-Left Democratic Students Union (DSU) to protest against the “judicial killings of Afzal Guru and Maqbool Bhatt” and for the Kashmiri peoples’ “democratic right to self –determination.” Before the event, the ABVP asked the JNU to withdraw permission. The DSU, on the other hand, sought the help of the JNU Students’ Union (JNUSU).

Maheish Giri, the BJP MP from East Delhi, lodged an FIR on 11th February against several unknown students was lodged at Vasant Kunj (North) police station. It was registered under IPC Sections 124A (sedition), 120B (criminal conspiracy) and 34 (acts done by several persons with a common intention).

JNU set up a proctorial committee to inquire into the incident, following which the university barred eight students from academic activity pending an enquiry.

On the same day, Kanhaiya Kumar, president of the JNUSU was arrested on charges of sedition and conspiracy. Kanhaiya Kumar, a student from Bihar joined JNU to complete his doctorate in African Studies. He was ordered to three days of police custody.

During the week, Rajnath Singh received flak for saying that the event had support from LeT chief Hafeez Saeed. He based this on a tweet which was from an unverified account.

Students of JNU gave a shutdown call, saying that they would not allow classes to be held on the campus till Kanhaiya Kumar was released. JNU teachers too, joined the students.

On 15th February, students and reporters at the Patiala House Court were roughed up. BJP MLA O.P Sharma was caught on video beating up a CPI worker. On 16th February, the Delhi High Court refused an NIA probe into the event. A First Information Report (FIR) was registered over some “lawyers” thrashing journalists at Patiala House court.

On the 17th of February, a petition was filed by a JNU alumnus in the Supreme Court seeking a fair trial, a fundamental right under Article 21, for Kumar. The SC bench headed by Justice Chelameshwar imposed strict entry restrictions into the Patiala House court as well as the court room. Only the lawyers for the two sides, two relatives of the accused, and only 5 journalists would be allowed in the courtroom.

The court extended the police custody of Kumar to February 17. On 17th February, he was sentenced to two weeks of judicial custody against which order he has moved the Supreme Court pleading for bail due to “extraordinary circumstances”. The SC upon hearing this matter on 19th February denied the same asking him to approach the appropriate court.

Despite this, violence occurred again. The group of lawyers chanted slogans and attacked journalists. The Delhi Police Commissioner was asked to submit a report citing reasons for his failure to maintain law and order.

Sedition, in India, is covered by Section 124A of the IPC. In Kedar Nath Singh v. State Of Bihar, a Constitution bench of the SC made it clear that allegedly seditious speech and expression may be punished only if the speech is an ‘incitement’ to ‘violence’, or ‘public disorder’.

The Court is under extreme pressure. The event happened when the Siachen tragedy occurred. Patriotism with shades of jingoism is on an all-time high. It is now upto the Court to render justice in this matter.

Previous articleLord Hanuman Charged with Summons – and Other Bizarre Cases
Next article‘Occupation’ under Article 19(1)(g) does not Include MLA’s Office: SC