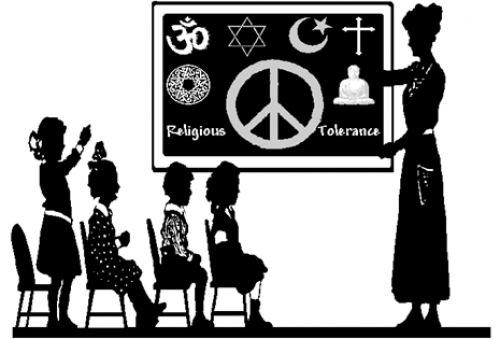 In the 21st Century, religion and freedom have been seen as two contradictory terms. In relation to religion, the freedom of expression has been tested in recent times. In a pluralistic society like ours, religion has a profound impact upon the political bodies. Concern of religious sensitivities has made a profound impact upon the working of the political bodies in India. India is known to be the largest democracy in the world. But, it is also known to be a ‘Liberal Democracy’. Freedom of Expression is considered to be the cardinal principle of the Indian Constitution. The tenets of secularism and freedom are enshrined as fundamental rights under the Constitution. But, religious intolerance destroys the very tents of the constitution. Freedom of expression will continue to remain under siege unless all groups accept that every individual can have a different set of opinions and beliefs. As observed by Justice Chinnappa Reddy, “our tradition teaches us intolerance, our philosophy preaches tolerance, our constitution practises tolerance, let us not dilute from it”. The observation made by Hon’ Justice must be withheld, recent incidents have accelerated the menace of intolerance.

Violence and religion cannot go hand in hand. Any attempt to disrupt free speech in a healthy democracy is simply an attempt to jeopardise the growth of a free mind. Constitutional makers had envisioned the need to promulgate the necessary provisions to uphold religious freedom and freedom of speech. Article 19(1)(a) of the Constitution provides “Freedom of Speech and Expression”, whereas Article 25-28 of the Constitution provides “Freedom of Religion”. The makers have restricted these provisions with certain provisions in order to check the misuse. But, in recent times, the use of these provisions under the constitutional framework has been jeopardised by extremist forces.  The focus of this article is to highlight the menace of intolerance, and the role of the judiciary to uphold the basic structure of the Constitution.

Instead of being a Liberal Democracy, there is a surge of intolerance prevalent around the nation. Recently, the rising intolerance and extremism has gained momentum around the nation. In 2014, the Prime Minister Narendra Modi propounded the mantra of development and making a prosperous and developed nation, but these promises seem to be perished. Seeing the recent incidents of religious intolerance to curb free speech, such as the cold blooded murder of writers like M.M. Kalburgi, Dabholkar and many more by Sanathan Sanstha or the lynching in Dadri has created a nationwide debate over the rising force of extremism. Recent violence in Malda or the suicide of Rohith Vemula are some examples of growing religious intolerance. These incidents are the setbacks that are diluting the goals of development and hampering religious harmony. The citizens have protested and shown concern to this rising extremism. Many poets, writer have returned their awards (Award Wapsi), a way of protest, to Sahitya Academy. Many scholars, writers, actors, luminaries and citizens have raised their voices to this growing intolerance. Extremism has no religion. Radicalisation of impressionable youth to join the terror groups or Hindu extremism by Vishwa Hindu Parishad and its affiliates does not represent a religious ideology. Their actions are in direct contradiction to any religious teachings and constitutional provisions. Due to these violent incidents, many feel vulnerable for exercising their fundamental right of freedom of speech and expression.

There are numerous provisions curbing the freedom of speech and expression. The Government has supported such provisions, and curbed its revocation. Such provisions such as Section 295A of the Indian Penal Code. The misuse of this provision can be better explained by discussing a recent incident. The arrest of Kiku Sharda mimicking Gurmeet Ram Rahim Singh during a comedy show has rekindled the debate on India’s regressive speech laws. Section 295A is a variant of ‘blasphemy law’ in India. The section penalises insulting a religion or religious belief of any class of citizens, if such insult is offered with deliberate and malicious intention of insulting the religious feelings. The section clearly raises a controversial provision that impairs a citizen to practise his/her fundamental right enshrined under the Constitution. The arrest of Kiku Sharda throws light on the debate of intolerance, and how religious sensitivities curbs one’s freedom of expression. Unfortunately, the Hon’ Supreme Court of India had upheld its constitutionality in Ramji Lal Modi v State of Rajasthan,[1] but such observation is completely different to the current situation. Today, when we think of progressing by enforcing schemes like Startup India, Digital India etc, the Parliament must take a forward looking step by scrapping such outmoded provisions, that are also misused for political ambitions.

Fortunately, the Hon’ Supreme Court of India is a valiant defender of freedom of speech and expression. The feeling of hurt is very rampant due to the rise religious sensitivities. Any picture, play or movie that depicts certain religious practise or belief is somehow hurtful to that religious section. Such examples can be taken of the film ‘PK’ or DA Vinci Code or musical performance by a teenage girl in Kashmir. The vandalism caused as a way of protest indicates the rise in religious sensitivities. The religious sections demands ban on those that are considered to be hurtful. But, the Supreme Court of India with its wisdom has scrutinised such issues very diligently, revoked such bans that are intended to curb the freedom of a citizen to express his/her opinion freely. Taking one such example, the well-known actor Khushboo faced several criminal prosecutions on her remark for the support of premarital sex and its prevalence in metropolitan cities which were considered to be against the ‘dignity’ of the Tamil women. The Supreme Court quashed the criminal proceedings on the ground that “under our constitutional scheme different views are allowed to be expressed by the proponents and opponents. Morality and criminality are far from being coextensive. An expression of opinion in favour of non-dogmatic and non-conventional morality has to be tolerated and the same cannot be a ground to penalise the author”. The Hon’ Apex Court had taken a similar stand by quashing the ban on the brief scene of frontal nudity in the movie ‘Bandit Queen’. Therefore, the exhibition of a movie is included in the fundamental right of freedom of speech and expression guaranteed by the Constitution. In the context of hurt feelings, the Hon’ Court has taken the stand again and again and observed that  the standard to be applied for judging should be of an ordinary man with sense and prudence and not of the hypersensitive person who sense offence in every scene or perceive hurt in every statement.

Despite the fact that courts have taken a judicious stand on several instances, the menace of religious sensitivities curbing freedom of expression is yet not over. There are many arbitrary and outmoded provisions prevalent in the statutes that empower religious forces to misuse it with the support from political bodies. Like Section 295A of the Indian Penal Code would have to undergo judicial scrutiny because its constitutionality had been upheld by the five judge bench. So, this would be a dilatory process, and it can be held unconstitutional only by the seven judge bench. There are sedition laws, Section 124A of the Indian Penal Code, misused by the government bodies to hamper free voices. In this progressive period, a strong need is felt on whether religious sensitivities are over free expression. To counter such radicalised ideology, a collective stand is required to be taken to hinder such forces that propagate such intolerance in the age of development and global competitiveness.