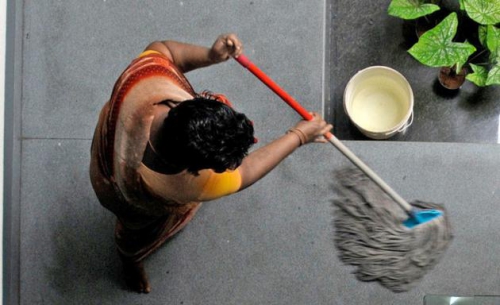 Without any comprehensive legislation to fall back on, domestic workers can be defined as a group of people whom the society and the government ignores at large. An average part time domestic worker works for around 14-16 hours per day; their days are not only physically but are also mentally exhausting. They are treated like slaves and go through a lot of mental and physical harassment at their workplace which is a very unconventional workplace i.e, a household. In cases of full time domestic workers, they are usually deprived of good live-in facilities and sometimes are not even allowed to contact their own family members. However, although this issue of exploitation is very frequently reported, there is no comprehensive piece of legislation that the parliament has passed that has been specifically designed to protect the individual interests of these domestic workers. Till now, only a few minimal steps have been taken by the government to safeguard the rights of the workers, but these failed attempts have in no way made a difference due to which the severe exploitation continues.

What makes the situation even worse is the fact that most of these workers are from ‘Below Poverty Line’ (BPL) families thereby making them desperate to work even in a hazardous environment. Some of the workers are also illegal immigrants from countries like Bangladesh, Nepal, etc. and they entered India with the purpose and hope of earning enough money to support their families back home. However since these people are illegal immigrants, there is absolutely no legal recognition given to them because of which they aren’t eligible enough for the very few relief schemes offered by the government.

One of the schemes that is offered by the government is the Rashtriya Swasthya Bima Yojna (RSBY). This scheme was launched by the Ministry of Labour and Employment and it largely focuses on providing health insurance to all the families that fall under the BPL category, therefore this scheme even extends to providing insurance to the BPL domestic workers.

Other than this, a bill was passed by the Parliament named the Unorganised Workers’ Social Securities Act 2008. This bill was the first attempt to legislate security for Unorganised Workers. However, this act was criticized because it did not make it mandatory for the government to launch welfare related scheme for the unorganised workers. Also the scheme not only unfairly categorised the unorganised workers into ‘Above Poverty Line’ and ‘Below Poverty Line’ but was also silent on the matter of national minimum working wage for these workers. It was important for this bill to recognise the national minimum working wage as the domestic workers and other groups of unorganised workers who were not eligible to a moderated minimum wage under the Minimum Wage Act, 1948 were often exploited by the employers.

Although this bill was considered to be a failure in many aspects, it was still welcomed as a good initiative by the government to regularize the unorganised workers.

In the subsequent years another bill was drafted with the title Domestic Workers Welfare and Social Security Act, 2010. Experts considered this bill as the only substantial comprehensive legislation ever drafted with the purpose of guarding the rights of the Domestic Workers. It was believed that this bill would largely reduce the exploitation of domestic workers in the workplace. Sadly, this bill was never passed by the parliament, thereby still leaving the domestic workers in an exploitative position. This bill is still under the review of Women and Child Commission.

The need for a comprehensive legislation for domestic workers is imminent as the migration rates are constantly increasing and more people are now getting attracted to migrate into metropolitan cities like Delhi and Mumbai. With the increase in number of women in the total work force; the profession of domestic workers has emerged as one of the most popular and prominent professions among the women belonging to BPL families. Therefore, it is argued that a comprehensive legislative bill should be passed by the parliament urgently, which should aim to regularise the profession of domestic workers by regularizing certain things such as minimum wage, maximum working hours per day, minimum number of holidays available and other social securities related schemes. Let us try to make this world a better place for everyone instead of making our own lives more comfortable.

Previous articleThe strategy of ‘Differential Pricing’
Next articleAll you need to know about the Green Tribunal Act, 2010