The strategy of ‘Differential Pricing’ 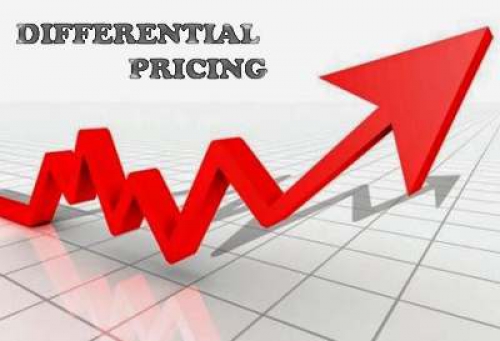 From past few months, a burning issue for everyone in this country has been Net Neutrality. Some people support it whereas others don’t. But, what is the main thing which is opposing this very basic right of Net neutrality? Well, it’s a specific kind of pricing strategy. And this strategy is known as ‘Differential Pricing’. The next question that comes to our mind is ‘does this differential pricing exist in every scenario with which we deal in?’ ‘Is it really of the benefit to the people or the companies who provide it?’, ‘what are its disadvantages?’ And also, ‘should it really exist in a country like India?’

First of all, let us understand what ‘Differential Pricing’ is. This kind of pricing strategy can be seen by all of us in our common day parlance. Let us understand it through an example. Suppose, a person belonging to a low income group goes to a shop and buys a ‘Bisleri’ water bottle. Now this would be available to him at a lower price. The same quantity of ‘Bisleri’ bottle when purchased in a hotel, is available at an increased value of money. In addition to it, when you buy the same quantity of the same company from an Airport, you would get it at another increased price. This is differential pricing. Simply putting forward, in Differential Pricing, a specific quantity of a product of the same company of the same quality, is available at different set of prices to people belonging to different levels of income in a society.

Such pricing strategy has existed since a long time and is restricted to not only a country like India, but actually exists in the entire world, where there is a market for a particular product of a said company and all the people value it differently as per their needs and hence they are willing to pay different prices for the very same quantity purchased.

Differential Pricing can also be used by a company in the form of, special discounts which are seasonal, rebates, vouchers etc. by which, those customers which were not able to purchase or use a product earlier, are able to do so because of this pricing strategy. In this process, they end up paying less than those people who have to pay the original higher price of the same commodity. Another example can be that of the concept of ‘happy hours’ or ‘happy meals’ in various restaurants and bars. In this, specific hours of time is fixed by the restaurants in which people can buy the food or drinks at a lower rate in comparison to eating in that very same restaurant at some other time. This strategy works well in such market environment where the market factor of strict substitutes is available to the society at large. Thus, a company uses this strategy so that all the people, apart from those who are willing to afford the product at a higher price for the same quantity and same quality, are able to purchase the product within their budget, in comparison to the rival companies or firms.

However, the issue of differential pricing came into sudden notice by everyone due to the raising of the issue of ‘Net Neutrality’. What is important but obvious here to notice is that both the issues oppose each other. And, I think it would be important here to understand first what net neutrality is after all. Net neutrality has existed in our society since a long time. However, in India, there is no legal recognition to this neutrality. And hence it was more of looked at as a norm. Under this, all the websites on the internet, be it national or international, be it Facebook or YouTube or Netflix or any other websites, all of them could be accessed at the same price for the same speed. A person didn’t had to worry about paying extra charges for accessing any particular website.

Also, it became a burning issue when companies like Airtel wanted to bring in the differential pricing strategy in this very own usage of internet. Its basic motive? Well, as said by the others, to profit. Airtel came up with a ‘Zero Marketing Platform’ recently. This violates the motive of same access to all the websites regardless of origin because under this new project of Airtel, the users can access only a particular set of websites at zero rate costs, in comparison to other websites which are not favoured by Airtel. This kind of differential pricing simply revokes and offends the very concept of net neutrality with respect to the entire world of internet which should be accessible to all the people in this world at the very same price.[1]

The harm of differential pricing in this issue would be to other companies and young business start-ups who are not favoured by the Airtel Company, probably because they have not paid Airtel huge sums of money. In this race for large market reach and control, these companies would suffer, as a normal consumer would then access and use only those websites which are under the scheme of Airtel Company. A very good example can be that of ebay and snapdeal. If suppose ebay is under that particular scheme and is charged free of cost to the consumer, then that particular consumer would be forced to purchase from ebay and not snapdeal because Snapdeal is not favoured under this scheme simply due to the reason that it hasn’t paid large sums of money to Airtel.

The main disadvantage of differential pricing becomes visible to us here. This pricing strategy ends up ruining the business of small companies and young start-ups and gives full and absolute market power and control to few large firms or companies. It violates and hinders the concept of Net Neutrality. Furthermore, it increases ‘Anti- Competitive behaviour’ and ‘discrimination’ amongst the firms belonging to any product market.

On the other hand, in many other market conditions, differential pricing can also prove to be advantageous. Like, for instance, it helps the product company in increasing its customer base. The reason behind this very important advantage is that the company introduces different prices for the very reason so that the people who could not earlier afford the said product, are able to purchase it. Also, it avoids losses as this benefit is not available to everyone, as the company continues to sell the very same product to other people in the society at a high price, who can afford it. This helps in increasing the overall market sales of the company.

Thus, the strategy of differential pricing can prove to be strong, efficient, and effective, if, it is brought in or implemented in the market keeping in mind the fact that it doesn’t violate or discriminate towards any other product or firm wrongly. It is clear that this pricing strategy has proved to be a disadvantage, rather a monster, hindering, spoiling and bringing a threat to the idea of ‘net neutrality’. However, at the same time, the very same strategy has proved to be advantageous in other domains of market. There is nothing wrong with this pricing concept, but the only thing that matters is how and where it is used in and how it serves the purpose of benefitting the entire society and not wrongly discriminating towards anyone in particular.