The Constitutional Relevance of Reservation Today 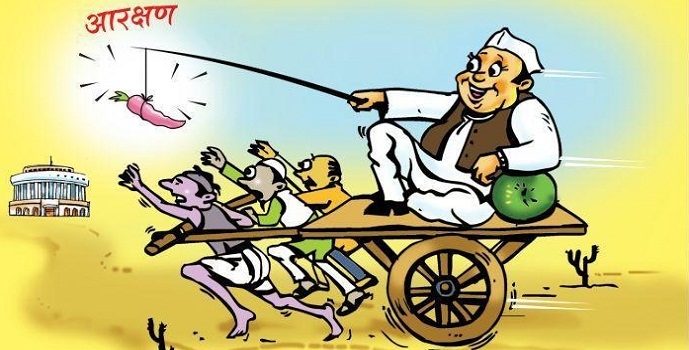 Article 15(4), 15(5) and 16(4) expressly provide the executive with a right to advance reservation to Schedule Castes, Schedule Tribes and ‘Socially and Educationally Backward Classes’. These Constitutional provisions give the option of Reservation to the “State” as can be deciphered from the language of the articles.

The main factor that is of debate is the interpretation of the phrase ‘socially and educationally backward classes’ and who all can seek reservation under this provision.

The most important thing to be understood here is that the above Articles offer a discretion and does not create any constitutional duty or obligation. It lays down no particular criteria to say who are SEBC’s and who are not. It leaves the matter to the state to specify backward classes but the courts can go into the question whether the criteria used by the state was relevant or not.

Applying this interpretation to the recent issue of the Patel Community’s demands, it solely depends upon the State and its prudence to decide whether the Patel Community deserves reservation under the OBC category and be included in the so called ‘backward’ classes of the state. The protests and even the violence cannot legally compel the state to advance reservation for the Patel community or any community whatsoever. The interpretation of Art.15(4) through the judicial precedents cited above clearly expounds that until or unless the State of Gujarat itself genuinely feels that the Patel community are worthy of reservation and fall within the contours of the Socially and Educationally Backward classes, the Patels will not be able to realize their futile dream of ensuring reservation for their beloved community.

The conclusion that we draw is that Reservation cannot be claimed as a right, it is merely an ‘enabling provision’, an ‘entitlement’ or ‘affirmative action’, as they call it in the US. Reservation is a tool which is being used by the executive so that the classes who have been previously devoid of opportunity can be placed on the same starting line as the other citizens and then there is an equal opportunity for all. That is the very essence of equality as defined by Aristotle- ‘equality of treatment in equal circumstances.’ So, the objective of reservation is to merely reach those ‘equal circumstances’ for those who have been unequal in the past.

This brings us to another very important question. Should reservation cease when the backward class has reached the stage of ‘equal circumstances’?

No class of citizens can be perpetually treated as socially and educationally backward. Backwardness cannot continue indefinitely and forever. There is no such thing as “once backward, always backward”. The State may review the situation from time to time and decide whether a given class of citizens which has been held to be backward through some past government order continues to form part of that category or has ceased to be in that category.

Article 15(4) and 16(4) nowhere state that the “backwardness” of any community will last for time immemorial. Through the text of the bare act and the judicial interpretations it is quite clear that the ‘backward’ status of communities changes with time. A community which might have been backward yesterday might be a rich and prosperous community today. No way should they be allowed to reap the benefits of reservation. In fact, as such communities have evolved and broken the shackles of their backwardness, reservation from these communities must be withdrawn. This withdrawal which has emptied some space should be used to accommodate more and actually needy communities which are “backward” in the true sense and require the assistance of the tool of reservation to come at par with the other “General” class of citizens. And once these communities have attained this status and are no longer backward, their reservation should again be withdrawn and space must again be given to the other needy communities. In this way the tool of reservation can be very effectively and efficiently used to bring about an equal class of citizens throughout the whole country and then and only then will the State be a true “protector” of Fundamental Right of equality under Article 14. It should be remembered that reservation is not the end, it is only the means through which the end of equality guaranteed by the constitution as a Fundamental Right is to be achieved. Reservation is but, merely a method, a manner of achieving this object. The citizens, communities and castes should not pursue the goal of seeking reservation but the goal of seeking equality. But unfortunately, if we go through Article 334, Constitution of India 1950, the term of reservation has just kept on being extended. Initially, reservation began with the objective to last only for the first ten years and today, through various amendments it stands at 70 years i.e. it is supposed to end in 2020.

Also, unfortunately, the ‘backward’ classes do not give up their ‘backward status’ easily even though they might have long ago ceased to be backward and might be supremely advanced both socially and educationally. Through the course of time we have regularly heard of new communities protesting for reservation everyday but rarely do we hear that a community has ceased to be ‘reserved’ for reason of it being no longer backward. This has to stop. Like the Prime Minister recently came up with the giving up of LPG subsidy for those who do not require it, the same should be done for Reservation. The communities who are no longer backward should be encouraged to give up their reservation and if they do not committees should be regularly appointed to ascertain their ‘backwardness’ and snatch away their reservation if they are not entitled to it. This carrot and stick approach is essential if we want to achieve the goal of equality.

The days when the ‘backward’ communities strived to be a part of the coveted “general” category and be prosperous are long gone. Now are the days when the general category craves to be a part of the much sought after ‘backward’ classes so that general category can get better opportunities. The demands of Mr. Hardik Patel are a perfect example of this phenomenon wherein they, being rich prosperous, well established business communities are striving to be a part of the OBC’s. If the present trend continues, the day is not far away when we will definitely need a separate reservation for the Unreserved Category who are living upon the leftovers of 50% after half the pie of reservation has already been eaten  by the reserved.

It should be remembered that reservation is only a tool to reach equality, it is not equality in itself. It is an ‘entitlement’ given by the executive which should and will be taken away once equal conditions have been achieved.

It should be remembered that backwardness is not permanent and even after all the attempts of the Supreme Court in Indira Sawhney to ward off the ‘creamy layer’ from the OBC category, some ‘creamy layers’ still exist and a review of these layers is immediately needed.

In my opinion, Reservation is not bad or evil, it is simply temporary and is a good tool if used in a right manner and in the right hands but can become a dangerous weapon if wielded by the wrong hands.