Uniform Civil Code Around The World 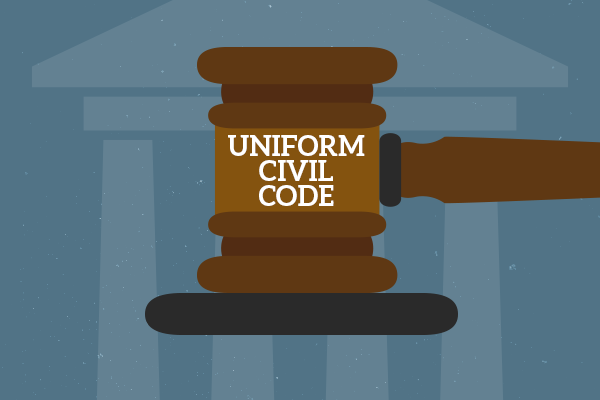 I have always believed that it is easier to achieve the equitable and welfare motive, howsoever hard it may be, if one has the proper and honest intention to work for the same. The debate on the Uniform Civil Code has once again revived in the country in last couple of years. Let us first see what Uniform Civil Code is really about. Today there are different sets of law governing the private or personal law for different community like Shariah law for Muslims, Christian law for Christians and Hindu law applicable on Hindus, Sikhs, Jains and Buddhists. Uniform Civil Code (hereinafter referred to as UCC) is a code through which variety of personal laws such as property, marriage, adoption, inheritance and succession based on different religious community will be subsumed into one uniform code throughout India. A Uniform Civil Code will mean a civil law for all people irrespective of caste, religion, gender and domicile same as that of criminal law which is equally applicable to all citizens of the country.

‘I personally do not understand why religion should be given this vast, expansive jurisdiction, so as to cover the whole of life and to prevent the legislature from encroaching upon that field.’ That was Baba Ambedkar has to say on UCC during one of the Constitution Assembly Debate. Pt. Jawaharlal Nehru saw it as the first step in securing a full national identity for the citizen. The implementation of UCC encourage the country by bringing in uniformity and consistency in the judicial system of the country through providing a common set of civil system by incorporating and embodying the custom and tradition of the different religious law. It will streamline the legal system and remove the unnecessary burden of maintaining various religious legal systems.

India is a developing and progressive country and its bit distressed to hear that we are not anchoring our attention toward achieving the fundamental objectives of equality and secularism that we have promised to provide to our citizens. India is a democratic country and everyone are ought to have their different opinion. Same is the case with the subject of UCC. Some believe that it will distort the basic foundation of the system by bringing in chaos and favouritism toward one religion and the voice of the minority would not be heard.

So what does Common Civil Code bring to table? The one prerequisite and necessary ulterior motive that is being served with this code is gender equality and social welfare. It can help the society in eradicating the gender disparity through eliminating the evil practices such as polygamy, triple talaq system and restitution of conjugal right in Hindu law to name a few. The applicability of UCC will also support by modernising and edifying the civil justice system.

It will also make the political system comparatively more fair and accountable as the political leaders and neta has to move away from their divisive politics and has to come up with more creative political agenda bringing a sort of political reform in the system. But now the question arises, why people are afraid of adopting this code? The people of this country have always been afraid to challenge the status quo of the system and try to believe in a system as long as that particular irregularity does not bring dismay to them. The change always has to be forced upon these people.

Now we should come to our core issue, how other countries have managed to do it? First of all we need to understand the different composition of various nations. India is a homogenous society constituting of heterogeneous contents. This nation has always believed in the philosophy of ‘Unity in Diversity’. The diversity and tolerance of India standout in the whole world and is the beauty and strength of this country. There are European Countries, Middle East Nation and Latin America. The Middle East Nation majorly comprises of Muslim community. And in most of these nation Shariah law, which is equally applicable to everyone. Now come to European nation and Latin countries where there has never been this question and a common set of code has been prevalent from long time for both criminal and civil system for better administration and deliverance of justice.

A Uniform Civil Code is the sign of modern progressive nation. It is a sign that the nation has moved away from caste and religious politics. While we are consistently working toward optimal economic growth, it might be right to say that socially and culturally we have degraded to a new low. A Uniform Civil Code will help the society move forward and take India towards its goal of becoming a developed nation. A Uniform Civil Code will be an advanced and dynamic step as it will bring objectivity and practicality to the system by removing the extreme subjectivity of religious laws. I understand that all is easier said than done. There will always be possibility of communal tension and riots. The government (including opposition) needs to work as one and a whole keeping aside their conflict of interest for achieving welfare of the country. We need to acknowledge the fact that the objective behind this is humanitarian and benevolent which need to be dealt with sincerity and sensitivity. An affliction should be taken to ensure that the code is not driven by religious or partisan consideration. It might bring back a sense of national integrity and unity among the citizens of India which to be honest has been precluded somewhere in dark in the recent past.