The menace of E-waste 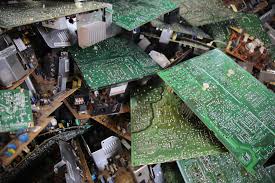 Electronic waste or e-waste describes discarded electrical or electronic devices. India is considered to be world’s fifth largest E-waste producer . India generates about 2 million TPA (tonnes per annum) of electronic waste per annum.[i] With the rapid growth of technology and the fast rate at which things become obsolete, the amount of e waste generated is expected to increase by leaps and bounds.

E-waste contains some precious metals like gold and platinum which can be salvaged and used further. Reports show that there is 100 times more gold in a ton of mobile phones than in a ton of gold ore.[ii]  A UN report cites that one recycler in China already produces more cobalt (by recycling) than what the country mines in one year. Recycled metals are also 2 to 10 times more energy-efficient than metals smelted from virgin ore. India, a country highly deficient in precious mineral resources (whereas untreated e-waste goes to landfill), could benefit from a well-designed, robust and regulated e-waste recovery regime which would generate jobs as well as wealth.

The disposal of e-waste not only causes wastage of resources but, pollutes the environment which is a major cause of concern. It is necessary to safely dispose e-waste as it contains hazardous chemicals. If they aren’t disposed of safely, those chemicals can pose a safety hazard to people, animals and the environment. They can contaminate soil, hazardous wastes can pollute the air and leach into water sources. [iii] The adverse impact on environment and health needs much consideration, especially with the present rates on informal recycling in India. About 95 per cent of India’s e-waste is recycled in the informal sector in an improper manner.[iv] Informal recyclers also known as backyard recyclers do not have wastewater treatment facilities, exhaust-waste gas treatment, and personal health protection equipment. This leads to the release of high concentrations of heavy metals in dust and air pollution.[v] The widespread network of informal workers who are employed to dismantle e-waste work for paltry sums without knowing the perils to their health. Old Seelampur in Delhi, where India’s largest backyard recycler is located, stands as a testament to these claims. May people along the cobbled wire lanes of Seelampur have died within the age of 30 owing to e-waste dismantling.[vi]

To tackle the menace of e-waste, the E-waste (Management and Handling) Rules, 2011 was enacted under Environmental Protection Act 1986(EPA). Thereafter, the E-Waste (Management) Rules, 2016 were enacted in supersession of the 2011 Rules and came into effect from 1st October, 2016. These rules made under Environmental Protection Act, 1986 is based on “extended producer responsibility” a concept which has emerged from polluter’s pay principle. The concept of extended producer responsibility will be in another article.