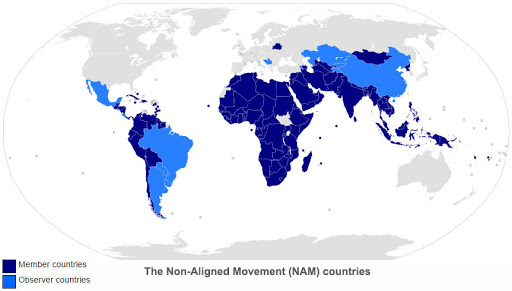 The online summit of Non-Aligned Movement Group took place on May 4, 2020. Prime Minister Narendra Modi also participated in the summit which took place through video conferencing.  ‘United Against COVID-19′ was the theme of the summit. The present Chairman of NAM Group i.e. The President of Azerbaijan Ilham Aliyev hosted the event. The event commemorated the International Day of Multilateralism and Diplomacy for Peace. The main objective was to promote international solidarity to fight against the pandemic.

In his intervention, Prime Minister Narendra Modi thanked the Chairman for organising the virtual conference. He further condoled all those who lost their loved ones amid COVID-19. Prime Minister emphasized the importance of a coordinated, inclusive and equitable response by the world to this crisis. He highlighted the steps taken by India both domestically and internationally. The PM claimed, that India has shown democracy, discipline and decisiveness even during the times of crisis. Moreover, the civilization of India sees the world as one family. Being that, while caring for its citizens, India has also extended help to other countries. The country made the best efforts to promote coordination with immediate neighbours. In effect, various online training sessions were organised to share India’s medical expertise.

India has ensured medical supplies to over 123 countries including 59 NAM members. The country shared some simple Ayurvedic home remedies to help people boost their immunity. Prime Minister further expressed his concern for the people spreading other viruses like Terrorism, fake news, and doctored videos to divide communities and countries. Adding to it, he claimed to shift his focus on positives.

Prime Minister claimed that the pandemic has shown the limitations of the International System. Being that, a new template of globalization, based on fairness, equality, and humanity is required. He emphasised the need for international institutions that are more representative of today’s world. The focus should be on human welfare along with economic growth. India has championed such initiatives such as the International Day of Yoga, International Solar Alliance, Coalition for Disaster Resilient Infrastructure et cetera. He called upon NAM to direct the international community and the W.H.O. to focus on building health-capacity in developing countries. Lastly, he called upon the member nations to come together and work with solidarity to fight the crisis.