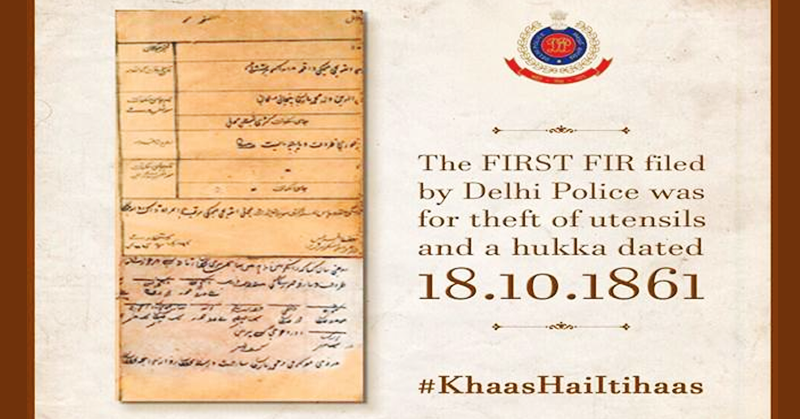 Criminal Law is one of the most intimate branches of law when viewed from a societal standpoint. Crime stands intertwined with society itself, and with the lives of almost every person within society. Often, victims or witnesses of crime have no idea what to do about what they experienced. One of the foremost duties of a State remains to ensure the safety of persons and property for all its citizens; to provide redressal on violation of this safety. For this purpose, a robust criminal law infrastructure has been provided, consisting of a Police System and large and complex hierarchy of courts of trial and appeal, laws, regulations and orders. However, this legal rabbit hole can and does prove inaccessible to the common man.

The police form the link between the legal machinery of the State and the people. Not only are they responsible for ensuring the safety of the people and public order, but also for accepting the grievances; apprehensions of the common man, advising them, and forwarding their complaints to the law for a solution. Thus, every citizen needs to know how to inform the police about their concerns, and how to follow up on them.

One of the most important documents or registers the police maintains is the General Diary or the Station Diary. The GD acts as the police station’s logbook. The GD contains all reports, complaints, arrests, seizures etc. as and when written. An entry in the general diary amounts to no legal value as such – it cannot be used to start a criminal investigation. However, it serves as proof that the police station received certain information or items.

For example, if some-

an aggrieved person can go to the police station and ask to make an entry in the general diary regarding the same. Depending on the information received, the police may or may not take some action. For example, a person engaging in disruptive behaviour may be called upon to sign a bond not to disturb the peace in the area. If an important document like a passport or something crucial like your mobile phone goes missing, informing the police by making a GD entry may come in handy later. If the item or document is used for some wrong purpose, the entry will act as proof that you had nothing to do with it. A GD may also be filed if you receive any threats, or if someone is missing in unusual circumstances.

Are you entitled to a copy of the GD Entry?

The General Diary is an internal record of the police station. Informants are not legally entitled to a copy of the entry they file. Some stations may give it, though. An entry may be made orally to the station in-charge (usually an Inspector) or in writing, addressed to him. It may only be filed at the station having jurisdiction over the area and must be taken free of cost. If the station refuses to file the GD or demands money, a complaint may be sent to the Superintendent or, in a metropolitan area, the Deputy Commissioner, in writing. In my opinion, it is always better to file a GD in writing, as you can make a copy of the entry and keep it for yourself, in case you need it – police stations may charge a fee to grant a copy, or may refuse entirely.

The First Information Report, or the FIR, probably the most well-known police document. At the first hint of any crime, ‘let us go file an FIR’ is heard. But in reality, the FIR leans to a bit more complex side as a document. Unlike the General Diary, an FIR is filed by any aggrieved person, referred to as the ‘informant’; with the express intent to start a criminal investigation into the matter at hand. The informant need not be the victim of the crime – the victim’s family members, friends, associates, or anyone at all having knowledge of the commission of a crime can file an FIR regarding it.

The First Information Report can only be filed when the case at hand is a ‘cognizable case‘. In simple terms, a cognizable case is a case where at least one offence committed is cognizable i.e. an offence which the police can investigate without the prior sanction of a Magistrate, and for which an officer may arrest without warrant. Serious crimes, like murder, abduction, or rape, are cognizable offences. It is the first information received by police regarding the commission of a crime.

FIR can be registered orally or in writing, by the Station House Officer (also called the station in-charge). In case the FIR is registered orally, the SHO is duty-bound to reduce it to writing. The written FIR, once made, is read over to the informant, and his signature is obtained. An entry regarding the receipt of the information is also filed in the GD. The informant is legally entitled to a certified copy of the report free of cost.

An FIR need not go into the minute details of the offence, or name any perpetrators, or present any concrete evidence. All that is necessary is that the report must, on the face of the record, disclose the commission of a cognizable offence. After the FIR has been filed, the investigation is started, and the details of the investigation are entered into a special case diary.

In the case of offences like rape, the FIR can only be registered by a woman police officer. Additionally, if the victim of the offence is mentally or physically disabled, the registration must be videographed; and performed in the presence of an interpreter or special educator, at any place of the person’s choosing. Additionally, the victim’s statement must be recorded by a Magistrate as soon as possible.

While, preferably, an FIR should be filed in the station having jurisdiction over the crime, there is no legal bar to filing an FIR at any police station. This is then known as a Zero FIR since it is registered with zero as the FIR’s ID number. When a police station receives a zero FIR, it must record the report as given. Then forward it to the station having jurisdiction, after conducting some preliminary investigation. The FIR will be assigned an ID at the correct station.

The FIR is a public document. In essence, any person can get a certified copy of the report from the public officer with custody of the document (usually the SHO) upon payment of the legal fees. This includes the accused in the case. However, the case diary is a privileged document. The accused cannot get a copy of it nor view it, except in very specific circumstances during the trial. However, the complainant, or any other person, can get access to various records such as the evidence obtained and persons arrested. Even the final report of the police can be obtained, by filing an RTI application; with the Public Information Officer in charge of the station. The mechanism of RTI amounts to an important tool in keeping track of the police investigation.

Can the police refuse to file an FIR?

If the police station refuses to take your FIR, the information may instead be sent in writing to the SP/DCP. The SP/DCP may if satisfied that a cognizable offence exists, can investigate the case himself or direct a junior officer to investigate. If that too fails, a complaint of the offence may be made directly to the Judicial Magistrate (usually a Magistrate of the 1st Class); who may then take cognizance of the issue and order an investigation.

The police can legally refuse to file an FIR if the matter is too petty; or if the facts disclose a non-cognizable case. Additionally, if at any point, the investigation discloses the fact that the case is non-cognizable, further investigation will stop until the Magistrate’s sanction to continue is received. If even one offence committed is cognizable, the entire case becomes cognizable and may be investigated as such.

Any person desiring to commence an investigation into a non-cognizable case must submit a complaint to the Magistrate. A complaint refers to a disclosure of the material facts of the case to a Judicial Magistrate with the intent of making him take cognizance of the issue. But a police report submitted to the Magistrate is not a complaint. However, if a police officer investigating a cognizable case finds that the case amounts to a non-cognizable offence; he submits a report to this effect. This report becomes a valid complaint, and the investigating officer becomes the complainant.

Once a Magistrate receives a complaint, he shall apply his mind to it. If he believes that the facts warrant an investigation, he will take cognizance of the issue. Then order a police officer having jurisdiction over the case to begin the investigation. Once the police receive the Magistrate’s sanction, the investigation commences in the manner of a cognizable case; except that the police must apply for a warrant if they wish to arrest any person. A refusal to take cognizance is appealable in the higher Courts.

The aforegoing paras discuss the basics of registering and following through on a report made to the police. Once a report stands finished and/or the sanction received, the investigation begins. Based on the investigation, the police file a final report; either to close the case or to begin a trial of the accused. Accordingly, the Magistrate may close the case, order re-investigation, ask the informant to appeal the closure, or take cognizance. Then, issue a warrant or summons to produce the accused before him and begin a trial. The details, however, must be reserved for a later date.