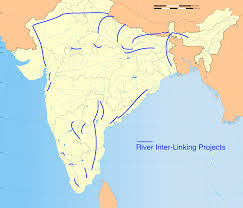 In 1999, the Central Water Commission propose a plan to transfer surplus rivers to deficit rivers. [i]This was later modified to include intra-basin development. Canals were proposed to transfer Canals are proposed to transfer surplus water from the eastern tributaries of the Ganga to the West, and to contribute to flood-control measures in the Ganga-Brahmaputra Meghna basin.[ii] In the 2010s, the project major thrust with various task forces constituted. In 2018, clearances for the Ken Batwa river project, the first proposed river linking project were applied and granted.[iii]

The reasoning behind ILR is to control droughts and floods, provide water to farmers and others and utilise the river water, most of which goes unused before entering the sea. It is one of the solutions to India’s growing water concerns. The ambitious project which consists of 30 river linking projects will provide employment to many for the purpose of construction and management. It will also help the farmers who are frequently plagued by water crisis and are forced to commit suicide.

While the manual diversion of rivers is an ancient practice, the ILR project of India giants all the projects that have been undertaken in the past. Without previous data to rely on and technical aspect of the project being classified[iv], it is difficult to predict the outcome the program. However, with the little that is known and the developments in the last decade, many have questioned the viability of the project. Human intervention in changing the course of rivers will adversely affect the riverine eco-system.[v]  The differential sediment regime defining the flow regimes need to be plugged into the equation of interlinking rivers.[vi] Some of the proposed projects such as ken Batwa project also bring about fears of deforestation, estimating that about 1.8 million trees have to be felled for the project . [vii] It would also cause loss of habitat to tigers, vultures and ghariyals living in the Panna National Park, across which the ILR project will cut through.

The viability of interlinking projects has also been questioned on political and cultural grounds. For example, the Ken Batwa project is currently at halt over a dispute about water distribution among states.[viii] Several states such as Kerala, Andhra Pradesh, Assam and Sikkim have opposed ILR projects. In an international level, the project has a possible impact on water flow to other countries like Bhutan, Nepal and Bangladesh.[ix]Another thing to factor is the cultural significance of rivers in India. Ever since the Vedic period, rivers have been worshipped by Hindus. Many religious sites important to Hindus are situated near river banks. Alteration to rivers is likely to be met by strong opposition by people claiming infringement of religious practices and less water for agriculture. And as with other river projects, ILR will cause widespread displacement of people, adding to public hostility against the project.

Despite these concerns, the project cannot be completely demerited. In order to properly analyse, more information has to be revealed in the public domain. The negatives and positives have to be weighed in before arriving at a conclusion.

Previous articleAnti-poor bail system in India
Next articleFact or Fake? The menace of spread of misinformation