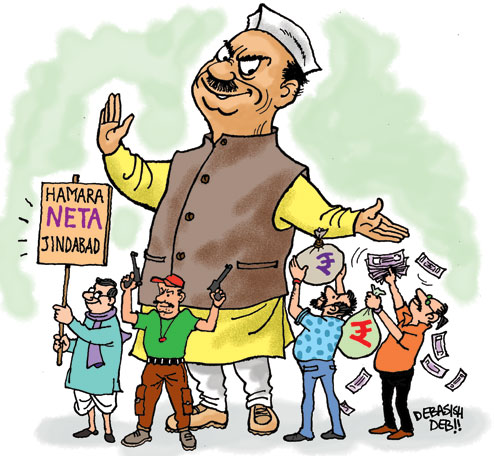 People appointed to various posts in the Legislative, Executive and Judiciary wing of governance, derive their rights, roles and responsibilities from the Constitution and as such are called constitutional functionaries. These functionaries, who have taken the pledge to uphold the constitutional principles, are charged with the responsibility of ensuring transparency and accountability in governance and not taint the principles of democracy with corruption. Criminalization of politics goes against these ideals of constitution whereby people charged or convicted with any crime enter politics and contest elections and in certain cases get elected to the Parliament or State legislature.

Article.102 and Article.191 of the Indian Constitution provide for disqualifications from being chosen as a member of the parliament or state legislature respectively, however these articles do not include, within its ambit disqualification of persons with criminal background and/or charged with offences involving moral turpitude and/or of persons against whom criminal cases are pending; from being appointed as ministers in the Central and the State Governments. Chapter III of the Representation of the People Act, 1951 provide for disqualification on grounds of ‘conviction’ of any offence enlisted under this chapter but not for reasons mentioned above.

In a recent case, a two judge bench of the Supreme Court comprising of Justice RF Nariman and Justice Ravindra Bhat observed that over the last four general elections, there has been an alarming increase in the incidence of criminals in politics. In 2004, 24% of the Members of Parliament had criminal cases pending against them; in 2009, that went up to 30%; in 2014 to 34%; and in 2019 as many as 43% of MPs had criminal cases pending against them.

In the absence of any legislation or constitutional provisions dealing with this menace a Constitution bench of the Supreme Court in Public Interest Foundation and Ors. v. Union of India and Anr, provided for the following guidelines to be followed before any person is appointed as a candidate to contest any election:

These guidelines were issued to make people aware about the criminal background of the candidates so that the public can be more vigilant at the time of electing them as their representatives. Since the Supreme Court lacks the power to legislate these directions need to be formalized into a law passed by the parliament to ensure their enforceability in case of non-compliance.