Can Violation of Human Rights be Passed of as Side Effects of Measures to Control the COVID Spread? 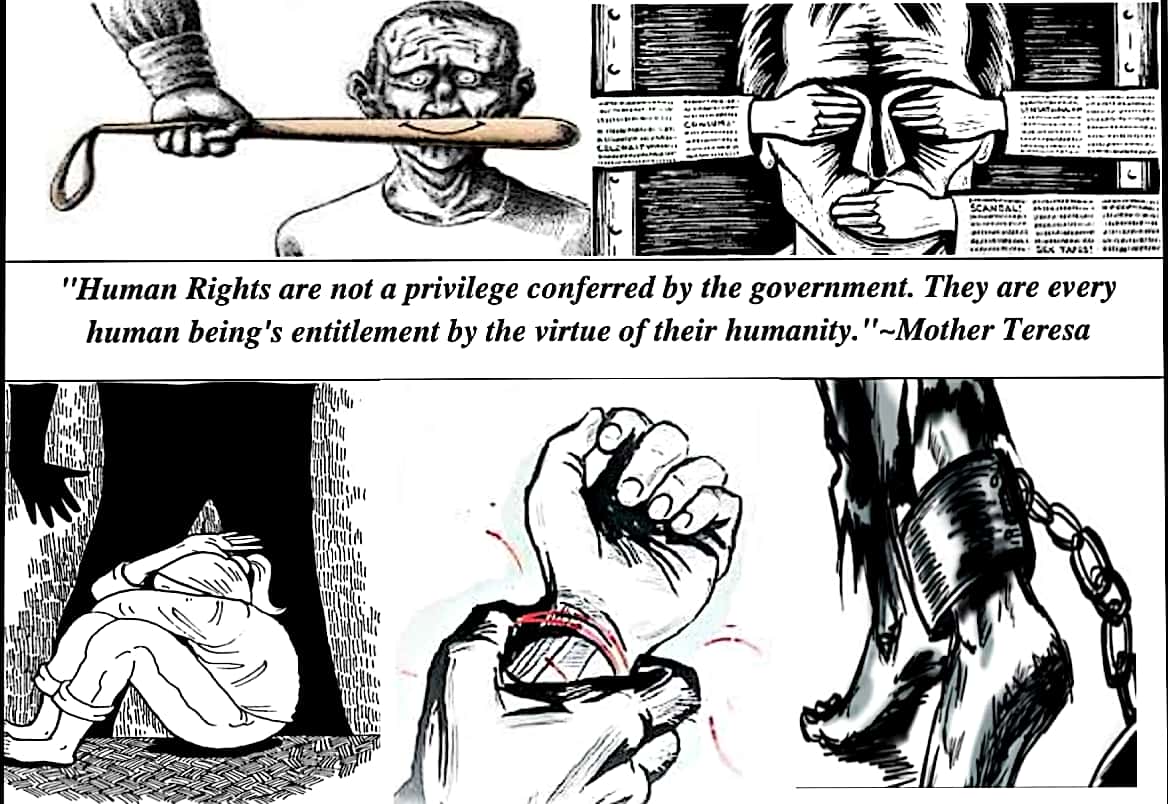 “Human Rights are not a privilege conferred by the government. They are every human being’s entitlement by the virtue of their humanity.”~Mother Teresa

Human Rights, Law, and Justice are the pillars on which the entire edifice of the society is built. Human Rights are to humans as the law is to society. These are the basic rights inherent to all humans by the virtue of their birth. Everyone is entitled to these rights irrespective of their caste, sex, race, gender, and place of birth. The Right to life and personal liberty, Freedom of speech and expression, Right to Equality and Freedom from discrimination are some of the human rights; enshrined in the Indian Constitution. Human Rights are based on certain values like equality, fairness, dignity et cetera. The law protects these values.

At present, every country across the globe is battling with the novel pandemic. Unfortunately, attacks, violence, abuse, denial of medical care, police brutality, suicides, rail accidents, and starvation has eaten up the human rights of many people. These times of crisis call for the adoption of a cooperative, comprehensive, and ‘human rights-based’ approach by the nations to reduce the inequalities.

Countries like India are forced to take aggressive actions in the wake of COVID-19; such as imposing lockdowns, restricting travelling et cetera. These measures are essential to prevent the spread of COVID-19, but they are also causing the issue of the abrogation of human rights and fundamental rights. In India, these Rights are protected by the Constitution. The Indian Constitution provides for Fundamental Rights to every citizen under Part III of the Constitution. Moreover, the National Human Rights Commission is a statutory public body which keeps a check upon the human rights violation.

The plight of Migrant Workers

A vast population in India is below the poverty line. Being that, India is facing the challenge of conflict of interests. On one hand, the government imposed and is extending lockdowns, and on the other hand, the vulnerable and poor people are suffering due to such lockdowns. The migrant workers rendered their services in the unorganized sector of the economy. Most of these activities stand shut down on account of the nationwide lockdown. In effect, such workers are facing financial hardships. They have no source left to earn a living. People are starving and are homeless and this is forcing them to walk back to their homes.

Ironically the special trains run by the government to commute the migrants are charging a higher fare; whereas It had brought back many stranded tourists from abroad for free. Isn’t this insensitive and blatantly inhumane? Further, depriving them of their basic human right to livelihood (Article 21). Further highlighting the priorities rather discrimination on part of the government. The government cannot dismiss the poor as secondary citizens. They cannot forget that these people form a major part of their vote bank.

Do we as a society owe this pain and suffering to them? They are the backbone of manufacturing and production units, construction businesses, transportation and delivery services et cetera. Keeping the humanitarian empathy aside, we need them as much as they need us.

The restrictions on Interstate transportation amid lockdown have forced tens of thousands of stranded workers to walk back to their homes. This is also taking a toll on their health. Thus, violating their Right to health as included under Right to livelihood. Furthermore, the vulnerable sections of society are mostly illiterate and less informed. Given that, they need to be made aware and dealt with properly. However, the situation is completely different. There are repeatedly reported incidents of cruelty by Public Servants. Public Servants including the Police Personnel sometimes act harshly. Probably, this is due to the tremendous pressure of effective implementation of lockdown guidelines upon their shoulders. In effect, such behavior undermines the rights of the individuals.

As a result of the reported incidents of cruelty, the National Human Rights Commission took cognizance of several complaints and media reports. Racial discrimination faced by a North-Eastern girl, the migrant lady carrying her half hung child on the suitcase, another lady giving birth to a child on the road, and walking back home, mob lynching of three persons are some of the examples. The Commission asked the Union Ministry to issue advisory concerning the same. Such inhumane behavior has deprived the victims of their Right to prohibition of torture, other cruel and inhumane treatments.

The incidents of attacks and violence are continuously hitting the headlines. There has been an alarming number of attacks on the Public Servants and Healthcare Workers. Healthcare workers are putting their lives at risk of infection to treat the patients. Despite working sincerely to deal with an unprecedented situation, they have to face violence, abuse, and harassment; further exposing them to verbal aggression. “We, as healthcare professionals, are not as scared of infections as we are of being assaulted and abused by the very community we treat,” said the Resident Doctors Association of AIIMS.

Unfortunately, the perpetrators are generally patients or visitors. Apart from their health, such cruel acts also affect their job motivation. Some incidents of such attacks are stone pelting at the doctors on duty in Moradabad, Uttar Pradesh; attack by a violent mob on the healthcare workers in Indore et cetera. All incidents of violation of the very basic Human Rights of healthcare workers.

There are no fewer attacks on the Public Servants including the Police Personnel. No punishment can justify the incident where the Police Officer’s wrist was chopped off. Be it healthcare workers or public servants no one deserves such behavior. These people are on duty to save our lives. They have stopped visiting their houses so that their families do not catch the infection. They have prioritized strangers (infected or those in need of help) over their families. Their contribution is to be honored and not to be abused.

Their Right to life (Article 21) remains at stake due to such attacks. However, on the other side of the coin, many people died due to the denial of medical healthcare. The 65-year old man in Kerala, an eight days old child in Agra, a seven-year-old boy in Pathankot, and many more died when turned away by hospitals. There is no justification for abrogating someone’s right to life and access to healthcare. No penalty or punishment can compensate for the loss of life.

Stay Home, Stay Safe! The home is safe. Isn’t it? No. The home is not a safe place for everyone. The children, girls, or women who were already living in abusive families are now exposed more to control and violence by abusers. In such times, it is difficult for the victims to access any kind of help. Allegedly the government is trying it’s best to extend help to the victims. The National Commission of Women has ensured the availability of shelter homes for the victims of domestic violence and the children who need to be protected. It has also circulated a WhatsApp number to report incidents of domestic violence.

However, the number of cases reported is far less than the actual number. It does not imply that there is a reduction in the number of domestic violence cases. Rather, due to the fear of the perpetrator/abuser in the house, a large number of cases go unreported. The lockdown has put the victim and the perpetrator in proximity; Depriving the victim of his/her right to prohibition of torture, right to privacy (Article 21) and even the right to seek a safe place to live.

Need for a human rights-based Approach

The incidents of human rights violations amid the lockdown are countless. From starving migrant workers to the ones who died in a railroad accident, from attacked healthcare workers to the patients turned away by the hospitals, from people who died as a result of mob lynching to the people pleading to restore 4G speed networks in the state of Jammu and Kashmir, from abused children to the aggrieved women, from corona warriors to COVID-19 patients and from the injured police officers to the Army officers who lost their lives in terrorist attacks. The list has no end.

No doubt, tough times call for tough decisions. Being that, the imposition of the lockdown and self-quarantine is indispensable to contain the spread of COVID-19. However, it’s negative impact cannot be overlooked either. The novel pandemic is not the only battle that the country is fighting. The country needs to adopt a human rights-based approach to maintain a balance between national interest and human rights.