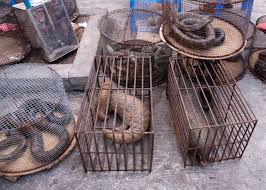 The world is currently witnessing global pandemic of Covid 19 or Corona Virus outbreak. As of today, Corona Virus has killed over 4000 people[i] and is estimated to spread to around 60% of the population. While it has not been conclusively proved yet, it is believed that Corona originated in the exotic animal market (known as wet markets) in Wuhan.[ii]

China has had a long history of wildlife animal trading. Initially, it was done for sustenance and over time it grew into a successful commercial activity. The resistance towards wildlife trade in China has always existed. The trade threatens animal species as well as humans with the spread of diseases. In 2003, The SARS virus outbreak which killed around 800 people also spread from China’s wet markets. The ongoing spread of Corona Virus is another befitting example of how China’s wet markets is harmful to humans.

China has a strong lobby of rich and influential people who keep the wildlife trade running and prevent shutdowns. But, with the spread of Coronavirus, China was forced to take steps to stop wildlife trade and stop further transmission. In early January, China announced a temporary ban on trade in wildlife which is expected to continue until the epidemic was brought under control. A temporary ban was also imposed during the SARS outbreak to control the spread of disease. But, the outbreak of viruses indicate that a temporary ban won’t have much benefits in the long run. Covid 19 which has now spread to 110 countries , has put unmounting pressure on China to impose a permananet ban on wet markets and animal trade altogether. China has also paid heed. With the spread of the disease showing no signs of abating, China passed a more comprehensive ban was passed on February 24 by the Standing Committee of the National People’s Congress (NPC), which exercises legislative power in the country.[iii] The ban declared on the latter half of February is being viewed as many as a step towards permanent ban on wildlife trade in China.[iv]

While wildlife trade is the way to go, it may not be so simple. Some fear that a permanent ban would push the trade underground and make it even harder to track the emergence of new diseases. There is also a high possibility that such a ban will face stiff resistance from stakeholders in the multibillion-dollar wildlife trade industry in China, which employs millions of people. It has also been speculated that the ban will only extend to consumption of wild animals. It won’t ban the trade or use of animals for experimentation.[v] Thus, the ban would do little for animal welfare.[vi]

In order to bring about a permanent ban, The world along with Chinese people have to put pressure on the government to do the same. At the same time, Chinese officials should recognize that wet markets harms humans and animals both and extended a blanket ban on wildlife trade than just restricting to consumption of wild animals.