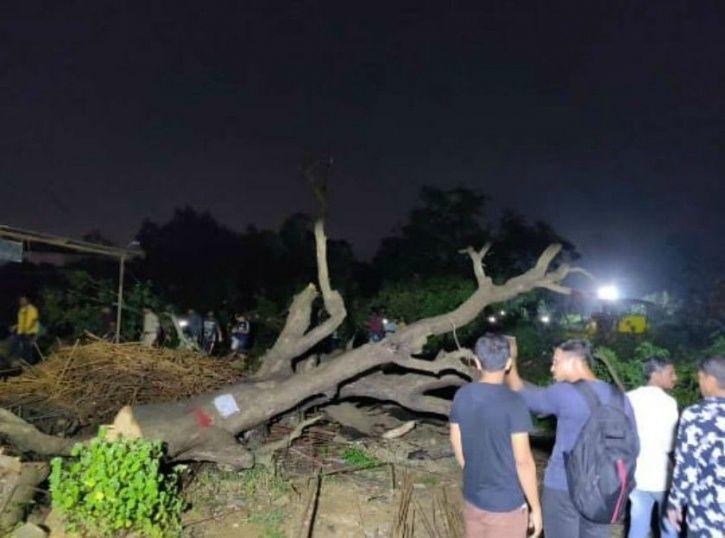 Maharashtra Government led by Uddhav Thackeray had set down the previous orders of the Tree Authority under BMC to construct a metro shed at Aarey Forest and decided to declare 800-acre, one-fifth of the total land as a reserved forest.

Spread over 3,000 acres Aarey forest, often called a green lung of Mumbai was established in 1949. Aarey constitutes 27 tribal hamlets, with an Adivasi population of over 10,000 and is home to 4,84,761 trees, 76 birds species and 290 wild species that also include 5 sensitive species i.e. leopards, rusty-spotted cat, Sambar deer, Alexandrine Parakeet and Red-wattled Lapwing which are on IUCN’s Red List too (International Union for Conservation of Nature).

“Aarey” the suburb area was marked out as a dairy development area, with the intension to provide fresh milk to Mumbai city way back in 1949, a dairy was inaugurated by then Prime Minister Jawahar Lal Nehru. But on the name of development human being has led uncounted disforestation with the blinded eyes. Back in 1977, around 490 acres of land was carved out from Aarey village to establish, Film City.

On November 2014 a proposal was made by the BJP government led by Devendra Fadnavis for the construction of 30-hectare car shed for Metro-III inside Aarey colony. Soon after the proposal, several protests were held against it. Siv Seena though part of the government, made their clear stand to go against this decision and led many protests against the setup of the metro car shed at Aarey.

The controversy over the Aarey forest took a new direction when BMC’s Tree Authority gave permission to cut down 2,700 trees at Aarey Colony for the Metro III car shed. Soon After the proposal made public, a penal member Shashirekha Sureshkumar submitted her resignation stating that

Several Public Interest Litigations were filled in Bombay High Court by the activists and environmentalist and city-based NGOs against the decision taken by BMC’s Tree Authority, urging for the Aarey Colony be declared as a protected and a reserved forest under the Indian Forest Act. Whereas the government and MMRCL told the Court that Aarey land is not “a natural forested land”, nor has it been recognized/notified/identified and demarcated”.

But it is pertinent to mention that the list compiled by some activists and environmentalist asserted that there are 86 species among the proposed cutting of 2,700 trees. Moreover, the activists said some of these species are only found in the forest which proves that the area marked out for Metro Car Shed was once part of Sanjay Gandhi National Park.

“The fact that forest species are found in this area is proof that it qualifies to be defined as a forest,” said Rajendra Shinde, Botanist. But the authorities carried out such a proposal contending that the said area, though green, is not part of any forest and belongs to the dairy department.

On 4th October 2018, Bombay High Court dismissed all the PILs and gave a clear way to the MMRCL to cut off more than 2500 tress for setting up of Metro car shed. This decision was pronounced just before the day of commencement of Dusshera holidays of the Apex Court. The Chief Justice of Bombay High Court orally observed and hoped that the authorities won’t begin cutting the trees before the reopening of the Supreme Court.

However, within the 24 hours of the judgment delivered by the Bombay High Court, the MMRCL (Mumbai Metro Rail Corporation Ltd) around midnight swung into action and started chopping the trees on the proposed site amid the ongoing pandemic. Soon the activists and environmentalists get the knowledge about it, they gathered in huge numbers, to protest against it under the banner of Save Aarey. To curb down the protest BMC gathered Mumbai Police and invoked Section 144 of Indian Penal Code, which led to the arrest and detention of more than 50 activists, environmentalists and tribal people who were doing nothing more than saving the trees to make Mumbai Green.

Amid the ongoing COVID-19 pandemic many people had shown their support to the activists against the outrage by the authorities, through social media including many Bollywood stars such as Alia Bhatt, Dia Mirza, Madhuri Dixit, Farhan Akhtar, Varun Dhawan, Karan Johar and Swara Bhasker.

Suo moto cognizance was taken by the Supreme Court, in response to the letter written by some of the law students to erstwhile Chief Justice Ranjan Gogoi for seeking his intervention in the matter of felling of trees at Aarey Forest.

Speaking to the media a law student said:

“While Prime Minister Narendra Modi received a Global Goalkeeper award by the Bill gates foundation, here the Bharatiya Janata Party Government in Maharashtra and the Centre were doing nothing to save Aarey forest”

A special bench comprising Justice Arun Mishra and Ashok Bhushan was constituted on October 7th, while hearing the matter, the court directed that no more trees should be cut and ordered the police for the immediate release of the all students, activists who were arrested for protesting to save the trees from felling.

On further hearing, the Supreme Court extended the interim order to freeze the further cutting of trees. The order came after the Maharashtra Government said ‘they are done with the cutting down of trees they needed for their plan to clear 33 hectares of Aarey land for the project’. The apex court also asked Tushar Mehta, the Solicitor General to submit the status of the plants which were planted after the claim of Mumbai Metro that it had planted around 24000 saplings in consideration of the plants they had cut.

The proposal to build Metro III car shed at Aarey Milk Colony was proposed by the Devandra Fadnavis led BJP-Siv Sena Government. Despite being part of the government Siv Sena opposed this proposal. The day Uddhav Thackeray led government came into power, he ordered to stop the work of Aarey metro car shed project. Later on 31st November the Chief Minister again ordered to withdraw all the cases filed against environmentalists during the protest to save the trees in Aarey.

On 11th October 2020 while addressing the state through the video conferencing a decision was taken by Uddhav Thackeray Government to move the metro III car shed, proposed at Mumbai’s Aarey Colony, to Kanjurmarg and declared 800 acres land of Aarey colony as Forest land. This decision raised a number of questions related to its impact on the cost and time due to the change in location.

Mumbai Metro Rail Corporation Ltd (MMRCL) officials have expressed their concern, that due to the changes in the location of Metro Line 3 Project. A committee of IAS Officers was appointed by the CM to review the site for car shed. The committee submitted that “it’s not viable to shift the Metro car shed from Aarey colony to another site”. But by changing the location of the car shed, CM had adhered to the committee’s advice which was appointed by himself.

The Expert Committee appointed by the Uddhav Thackeray itself stated in their report that “we do not find any added environment benefit in shifting the depot to any new location, as 2141 trees have already been cut at Aarey. As the new site will also entail some environmental disturbance to the new location and affect the biodiversity of that area”.

Also in the same report, MMRCL submitted that “as per the study carried out through environmental expert agency the annual increase in Carbon Dioxide emission due to removal of trees at car shed site at Aarey Milk Colony would get offset by 197 fully loaded trips of metro trains. It is further calculated that 4 days operations of the metro train during peak hours would offset the annual increase of carbon dioxide emission due to removal of these threes and the lifetime Carbon Dioxide increase in less than 80 days. Thus, the project is much more environmentally beneficial than the impact caused due to felling of trees”.

Despite the denial of the expert committee and without considering the environmental factors, Uddhav Thackeray led Maharashtra Government has changed the site for Metro III car shed as proposed by the BJP government. This action might be a political rivalry but in last it will only going to harm the environment and the citizens of Mumbai.

Previous articleLearn On Call: VOLUNTEER NOW!
Next articleMumbai Floods: Causes And The Aftermath