Freedom of Speech and Expression: Understanding the Legislation 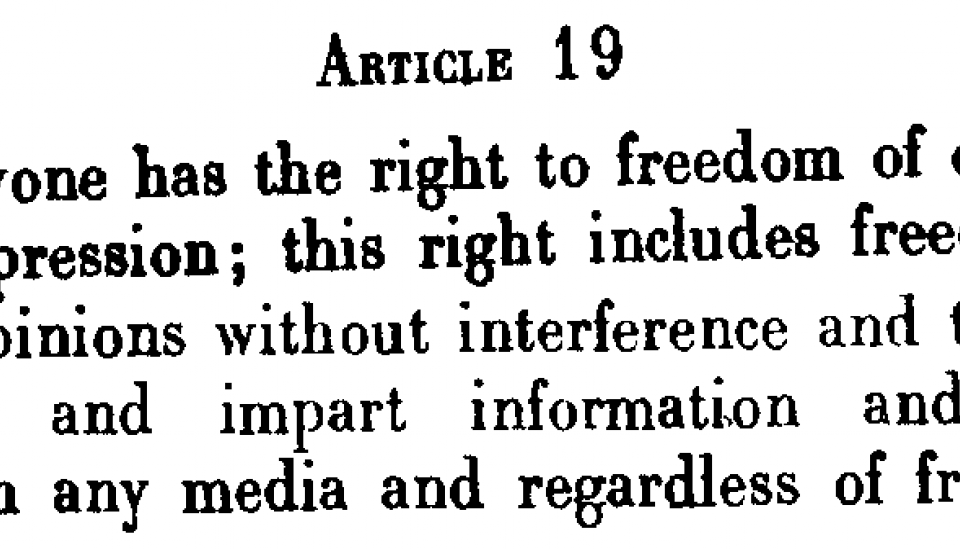 The idea of freedom of speech and expression was put forth and advocated by John Stuart Mill. More than 150 years ago. Its importance, over time, has only magnified with the rise of a rule of the people, for the people, by the people: democracy.

Freedom of speech and expression is fundamental to a democracy. It serves to bring out both the sides of a coin and reach a better truth. Ensuring participation of the citizens of the country, giving them the power to question their government, makes it vital for a healthy democracy. The United Nations recognizes Freedom of Speech as a basic human right. The UN protected it under Article 19 of the Universal Declaration of Human Rights in 1948.

“Everyone has right to freedom of opinion and expression; this right includes freedom to hold opinions without interference, and impart information and ideas through any media regardless of frontiers.” (Universal Declaration of Human Rights, 10th December, 1948)

However, is it an absolute right?

Is protesting peacefully a Fundamental Right?

Protests are a crucial part of a living democracy. It acts as a check against the actions of the government. It is always encouraged by those who want democracy to flourish. In fact, it has been referred to as the fourth pillar of democracy. The right to freedom of speech and expression, in the Indian Constitution, includes the right to protest peacefully.

In a landmark judgement delivered in 2012, the Apex Court of India said: “Citizens have a fundamental right to assembly and peaceful protest which cannot be taken away by an arbitrary executive or legislative action.”

The Indian Legislation governs the right to protest under the Constitution of India, the Indian Penal Code and The Code of Criminal Procedure.

Before holding a protest, permission has to be sought from the police (generally, varies from state to state). Therefore, in an application for holding a protest, information like name of the person, address, time, duration of the protest, number of people, route of the procession of the place of protest, and the cause has to be included. Additionally, the Police might ask for documents like proof of residence, proof of identity, affidavit and a photograph. Then, the police issues a No Objection Certificate for such a protest that can be denied on grounds enumerated hereinabove. However, such a provision is bound to be exercised with caution as it deals with curtailing of a fundamental right. Such a refusal may be challenged in the appropriate court of law.

If the permission has been granted, the conduct of a protest must remain non-violent at all costs. The Police are directed to be present during a protest at all times and video-tape it, as much as possible. When a protesting crowd becomes violent, even a protest for the noblest of the cause; turns into an unlawful assembly against the spirit of democracy. In case, a protest turns into an unlawful assembly, the police have the power to disperse such an unlawful assembly under Section 129 to 132 of The Code of Criminal Procedure. Use of force is also allowed in circumstances when the people at the assembly do not comply with the commands of the concerned officer. It is crucial to keep in mind that the police is directed to practice utmost restraint and patience.

The Police plays a key role in maintaining peace and calm during protest rallies. Protests can be tricky to handle, however, communication with the leaders and working together to ensure peaceful conduct is not impossible, per se. On the other hand, it is the fundamental duty of the people organizing a protest to keep it peaceful. An affidavit / self-undertaking is filed before the Police along with the application to hold a protest with this regard. Exercising the right to protest calls for strict compliance with the law while protesting for the cause. No cause is above the rule of law.

The Indian Penal Code, 1870, enlists the offences concerning the conduct of an unlawful assembly, rioting, violence, et cetera between sections 141 to 160. The highest term of imprisonment under these sections is 5 years, with or without fine. An FIR can be lodged by the police when any of the provisions under these sections is violated. The crux of the role of the police in protests is to maintain public order and security.

The conduct of the police and the state in the on-going protests has been either not up to the par or preventive. Thousands of cases were registered during the on-going protests under section 124A of the Indian Penal Code, i.e. Sedition. Blatant misuse of the provision of sedition has been rampant in these protests. It has been often argued that the provision of sedition has been used as a deterrent as punishment for sedition is more severe than the applicable provisions of IPC.

Although the crowd in the on-going protests have also not been compliant with the rule of the law, yet the police and the state must not be curbing protests or terming it as ‘anti-national’.

“Freedom of speech, right to assemble and demonstrate by holding dharnas and peaceful agitation are the basic features of a democratic system. The people of a democratic country like ours have a right to raise their voice against the decisions and actions of the Government or even to express their resentment over the actions of the government on any subject of social or national importance. The Government has to respect, and in fact, encourage exercise of such rights. It is the abundant duty of the State to aid the exercise of right to freedom of speech as understood in its comprehensive sense and not to throttle or frustrate exercise of such rights by exercising its executive or legislative powers and passing orders or taking action in that direction in the name of reasonable restrictions”. – Supreme Court of India

Dissent and criticism of the ruling government are essential to a healthy democracy. How a country deals with dissent brings out the truth of its democracy. In these times of dissent, are we holding up as the biggest democracy of the world?