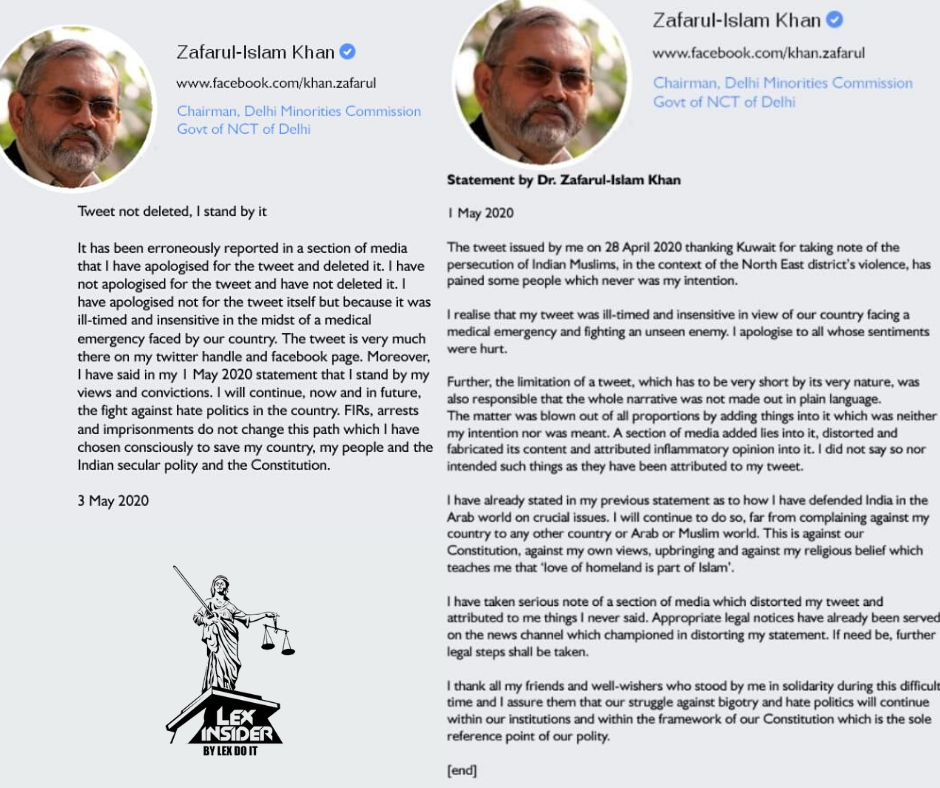 Advocate Siddharth Acharya filed a petition in the Delhi High Court. The petition sought action against Zafar-ul-Islam Khan, the chairman of the Delhi Minorities Commission. He allegedly made inflammatory and threatening statements against the Hindu community. The petition cites a Facebook post by the Chairman posted on April 28, 2020. The post referred to the Hindu Community as ‘Hindutva Bigots’. Allegedly, it hurt the religious sentiments of a particular community. Moreover, it threatened the entire community of dire consequences.

Petitioner argued that the city has recently witnessed deadly riots and mass protests in the northeast districts. The Chairman must have kept this thing in mind before making such remarks. Mr. Khan is alleged made these remarks with a mala fide intention. It is to malign the entire Hindu Community. Of course, this can result in an endless cycle of violence. Furthermore, the petitioner highlighted that the Chairman has violated several provisions. Some of them are Sections 124A, 153A, 295A, 505(2), of the Indian Penal Code as well as Section 66A of the Information Technology Act. Lastly, the High Court has the jurisdiction to secure the ends of justice. This is because the Chairman of a statutory Commission has committed the crime and not a normal individual.

Notably, after receiving ample backlash, Mr. Khan issued an apology for his post on May 1, 2020. He stated that “I realise that my tweet was ill-timed and insensitive in view of our country facing a medical emergency and fighting an unseen enemy.” However, In another post, dated May 3, 2020, Khan refuted the apology. He stated that the reports of him apologising and subsequently, deleting the apology was erroneous.